Children Uprooted: The Journey to Dallas 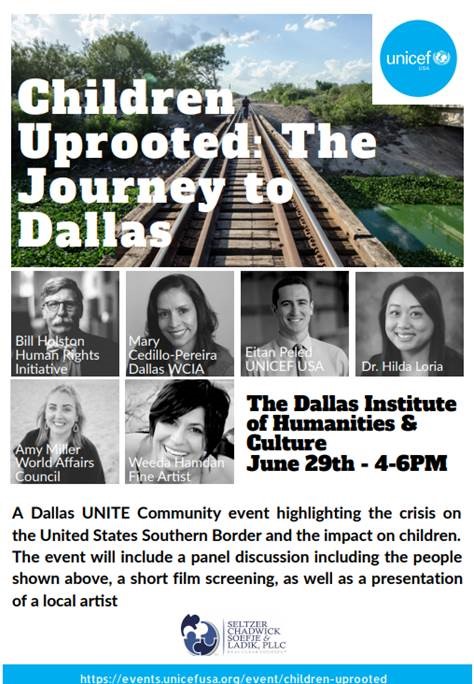 Recently, thousands of children and their families have fled extreme violence and poverty in the countries of El Salvador, Guatemala, and Honduras and migrated North to seek shelter. UNICEF is the world's largest humanitarian organization for children and is committed to children before, during and after their migratory journey to refuge. Join the UNICEF USA office in Dallas to learn how you can take action for children uprooted Saturday, June 29th from 4-6PM at the Dallas Institute of Humanities and Culture.

The event will include local North Texas artist, Weeda Hamdan's collection titled Uprooted as well as a panel conversation featuring perspectives to highlight the root causes for departure for children in the Northern Triangle, the journey North and its impacts for children, and the City of Dallas' response to the crisis.

Eitan Peled is the UNICEF USA Child Migration & Protection Program Manager based in New York City. He is a core member of the Child Migration & Protection Program, which seeks to guarantee the rights of children at every point in their migratory route – specifically Central America, Mexico, and the U.S. His international experience includes tutoring in Peru and teaching karate to refugees in the West Bank. Originally from Southern California, Peled speaks fluent Spanish and Hebrew, and holds a degree from UCLA – where he played water polo and studied economics, global studies, and public policy.

Mary Elizabeth (Liz) Cedillo-Pereira is the Director of the City of Dallas Office of Welcoming Communities and Immigrant Affairs established in March 2017. The Dallas WCIA seeks to be a bridge connecting Dallas’ diverse immigrant communities with existing Dallas residents so that common ground and shared leadership can be realized.  In this position, Liz has overseen the community-driven process to develop a comprehensive Strategic Welcoming Plan for the City of Dallas that was unanimously approved by Dallas City Council in 2018

Since 2012 Bill Holston has been the Executive Director of Human Rights Initiative of North Texas.  Prior to that he practiced law with Sullivan and Holston.  Since the 1980’s Bill has provided pro bono legal representation for political and religious asylum applicants. Over the years he represented clients from 21 countries in Immigration Court or before the Houston Asylum office. In 2005 he was awarded the Angel of Freedom Award by HRI. In 2015 he was named a Distinguished Alumni for Public Service by SMU’s Dedman School of Law. In 2019, he was honored with the Martin Luther King Jr Award by the Dallas Bar Association. Bill was one of the volunteer lawyers at DFW Airport during the implementation of the Muslim ban as well as the legal clinics in response to the recent workplace raids in Allen and Paris, Texas. Bill has a BA from UTD and a JD from SMU.

Dr. Loria is a board-certified general pediatrician and practices at the Rees-Jones Center for Foster Care Excellence at Children’s Health in Dallas. Her clinical and research interests focus on the care of vulnerable child populations, the impact of adverse childhood experiences and toxic stress on long-term health outcomes, and the integration of public health and medicine in the provision of pediatric primary care services. She is particularly interested in improving the health outcomes of immigrant children and children in foster care.

Amy Miller is passionate about human rights, women's empowerment and youth development. She has worked at the World Affairs Council of Dallas/Fort Worth since 2014 and serves as the Director of Education. In this role, she works with local teachers and students to develop global competence skills in the next generation North Texas international professionals. Amy earned her B.A. in international studies (focusing on Latin America and the Iberian Peninsula) from Southern Methodist University in 2012 with a minor in political science. She lived in Madrid, Spain from 2012 to 2014, where she earned an M.A. in international education from la Universidad de Alcalá de Henares and taught English in a charter school. In 2018, Amy received the award for Outstanding Support of Geography Education from the National Council of Geographic Education. Amy currently serves on the board of the Moorland Family YMCA in Oak Cliff and is a member of the 2018-2019 class of the Mayor’s Star Council.

Add a Donation to Your Cart